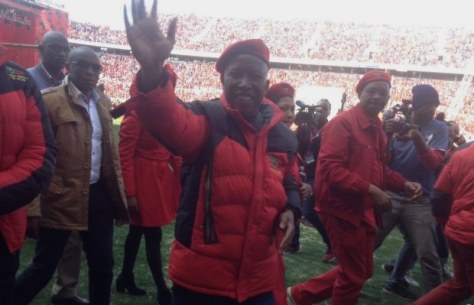 The EFF has taken a stance not to form coalition governments with either the ANC or the DA – effectively giving Johannesburg to the ANC and Tshwane to the DA.

Highly placed sources say the EFF will abstain from voting for key positions of mayors and speakers in hung municipalities.

EFF expected to announce coalition partner as parties wrap up deals ahead of deadline
The EFF position has left the ANC and DA in disarray.

The last option for the DA and the ANC will be to scramble for smaller parties which hold insignificant numbers.

A source who attended the EFF central command team meeting on Monday said the party would limit its participation in councils to deliberations on policy issues.

“We will vote on issues‚ but not on who gets what position or from which party a mayor must come from. We do not have a mandate from our people to govern‚” said a source.

Another source who formed part of the negotiation team said both the ANC and DA had failed to persuade the EFF to take sides on who should govern councils.

“After lengthy discussions and negotiations the EFF decided that they will abstain from voting.

“They claim that they respect the fact that voters did not give them a mandate to govern.

“The last option left for the ANC and DA is to partner with smaller parties‚” said a source.

The likely possibility is that the DA will govern Tshwane where they got most votes with 43 percent‚ and the ANC will retain the City of Joburg (48 percent) and Ekurhuleni (44 percent). Metros in Gauteng have been finalising their preparations for council meetings set to begin this week.

While coalition negotiations continue between various political parties‚ the council meeting for the City of Ekurhuleni will take place on Friday while one for Tshwane will be confirmed later this week.

The City of Joburg will hold its inaugural council meeting on August 22 at the City Hall as its chambers are undergoing reconstruction.

Its outgoing city manager‚ Trevor Fowler‚ has confirmed that it is all systems go for the council meeting.

In a statement‚ Fowler‚ who will be the presiding officer‚ said: “Part of the agenda on August 22 will be the swearing in of all 270 councillors‚ the election of Speaker of Council‚ Executive Mayor and Chief Whip of Council.

South Gauteng High Court Judge President Dunstan Mlambo or his deputy will administer oaths to councillors.” He added that the Electoral Commission of SA would run the council election process for office bearers. Once the Speaker is elected‚ he or she will then take over the running of the meeting as councillors elect the mayor.

The second Joburg council meeting‚ planned for September 08‚ will announce mayoral portfolio committees‚ members of the mayoral Committee‚ election of chairpersons of committees‚ including chair of chairs‚ and approval of members of various Section 79 committees.

Neither the DA nor the ANC won an outright majority in four of the country’s eight metros. Genevieve Quintal‚ from BDLive‚ summarises the number of votes and seats for the parties in these municipalities:

City of Johannesburg: The ANC received 44.55% of the vote‚ the DA 38.37%‚ the EFF 11.09% and the IFP 1.72%. The ANC has 121 seats‚ against the DA’s 104 seats and the EFF’s 30 seats. The Inkatha Freedom Party has five and the African Independent Congress (AIC) four. The Freedom Front Plus‚ African Christian Democratic Party (ACDP)‚ Al Jama-ah‚ the United Democratic Movement (UDM)‚ the Congress of the People (COPE) and Patriotic Alliance (PA) have one seat each.

Ekurhuleni: The ANC won 48.64% of the vote‚ the DA 33.65%‚ and the EFF 11.23%. The AIC has confirmed that it has agreed in principle to co-operate with the ANC in Ekurhuleni. The Pan Africanist Congress (PAC) has been approached by the ANC as‚ reportedly‚ has the PA. This would allow the ANC to retain control in the metro.