Ramaphosa is Western Cape ANC’s man for the job 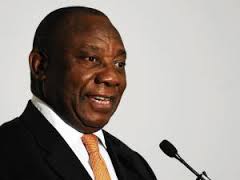 The ANC in the Western Cape wants Cyril Ramaphosa as the ruling party’s next president.

On Sunday, the provincial general council voted for the current party deputy president ahead of the ANC’s elective conference in Gauteng in December.

Ramaphosa got 121 votes, compared with only 13 for Nkosazana Dlamini-Zuma, seen as his main opponent.

Also getting support on Sunday were Lindiwe Sisulu, for deputy president, and Gwede Mantashe, for national chairperson.

The presidential race is expected to go down to the wire, Business Day reported, with swing provinces such as Mpumalanga rendering the fight too close to call.

While many have placed Ramaphosa in the lead, it is clear from the numbers that a victory is not yet guaranteed for either side, the newspaper said.

Dlamini-Zuma’s backers are confident of her chances, based on her backing in KwaZulu-Natal and the ANC faction known as the premier league provinces.